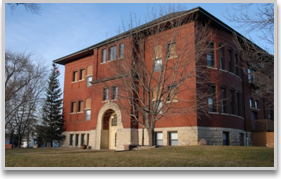 Lincoln Apartments is a building that is rich in Austin's history. It has been a presence in Austin, MN since 1887, rebuilt in 1909, added onto in 1938, and transformed over the years 1979-1985 into a rich historic upscale apartment complex. Lincoln Apartments has preserved so much of the architectural style that the exterior appearance is very similar to how Lincoln Apartments looked in 1909. If you were to look at a photograph of Lincoln Apartments in 1938 when the "new" section was added and compare that to its present look in 2010, very few exterior details have changed.

Although Lincoln Apartments was originally slated to be demolished it was saved by one man and his vision to see things that others simply could not grasp. That man is Gary Groh and he has saved this historic structure so that the city of Austin and its present and future generations may enjoy this treasure of Austin, MN.

Lincoln Apartments presently is a 27-unit apartment building that was once an elementary school. The building was purchased in 1978 by Gary A. Groh and with the help of his family have turned it into what it is today. Although Austin has lost many of its historical and architectural buildings, Lincoln Apartments remains as one of the few that have withstood the test of time.

In 1980 the very first apartment to open up for residency at Lincoln was Apartment #10. The resident that occupied that first apartment remained there for over 16 years. Over the next few years from 1980-1982 19 more units opened up and became available for occupancy. Finally, in 1987 we completed the transformation of the gymnasium area into 7 more apartment units, two of which are split level units. In 2009 we began to completely restore our 50' flagpole so that once more we may proudly display our American flag in front of Lincoln Apartments. On March 19, 2010 for the first time in over 30 years the U.S. flag began flying proudly.

You now have the opportunity to experience this architecture and rich history firsthand by becoming a resident at Lincoln Apartments. When you want something that is unique and out of the ordinary, where your apartment is as unique as you are, then you will find it at Lincoln Apartments. We look forward to having you as our resident. Welcome Home!