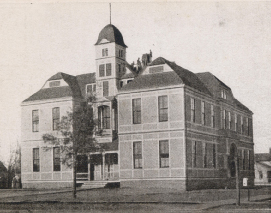 The original Lincoln School was constructed on the corner of Hope and Elm streets during the year of 1887, at a cost of $ 4,070. The "Third Ward School", as it was named then consisted of four classrooms housed in a white frame building, surrounded by a porch with a white railing. 174 students attended this original structure and were tutored by four teachers. In 1891 two additional classrooms were constructed and in January of 1895, the name of the building was changed from the Third Ward School to "Lincoln". Increased enrollments created a need for the construction of two additional classrooms in 1907.On January 8, 1909, around 4:00 a.m., flames were observed shooting out of the basement windows of Lincoln. By the time the fire department arrived, the entire first floor was engulfed in flames. As the firemen continued battling the flames in the near zero-degree weather, the heat was so intense that the four inches of snow on the ground that had surround the building was turned into slush.

The firemen were hampered by the depletion of the water supply in the city wells. Pumps were quickly set up at the Red Cedar River, but despite these efforts, and attempts by teachers to rescue school records, the building was a complete loss. At the time of the fire, Lincoln housed 340 students in eight classrooms.

The fire was thought to be caused by an overheated flue in the steam heating system. The building was valued at $ 15,000 but insured for only $ 8,000. The day following the fire, a committee was appointed for the purpose of finding temporary quarters for the 340 students. The action of this committee and the cooperation of the community must have been excellent, as the children missed only one day of school.

The fire not only affected the residents of the Lincoln district, but the remainder of the city as well. When the supply of water from the city wells was exhausted, water from the Red Cedar River was pumped into the mains. In this way contaminated water was circulated throughout the city. Several days passed before water could be consumed without it first being boiled. 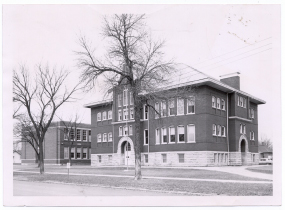 During that same year (1909), construction on a new eight room, two story building was initiated. This completed at a cost of $ 30, 350 and was occupied during the fall of that same year. This building still stands today (2010) but up until 1977 it was used by the two Kindergarten sections, combination Second and Third Grade, a Third Grade, a Fourth, a combination Fifth and Sixth, a Fifth Grade, and a Sixth Grade. In addition, this section of the building also held the IMC, the kitchen, lunchroom, and the office. In the summer of 1926, the tornado that passed through the city of Austin removed the roof and destroyed the chimney of Lincoln School. In 1938 another section was added to Lincoln. This addition consisted of four classrooms (Apt. 1, Apt. 2, Apt. 12, Apt.14) a P.T.A. Kitchen (office), a physical education equipment storage room, two locker rooms and a gymnasium (Apts. 3, 4, 5, 6, 15, 16, & 17). A remodeling program was undertaken in 1959. This included the improvement of the lunchroom, kitchen, library and Kindergarten facilities, and the refurbishing of the teachers' lounge and office. The end of the line came for Lincoln in 1977. That was to be the final year that Lincoln would be known as an elementary school.